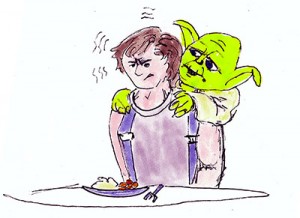 Use the fork, Luke.

I don’t mean to negate his galactic contributions, which are many, but even a Jedi master can get it wrong once in a while. If that weren’t true, we have never been subjected to The Phantom Menace. But I’m not talking about poor career choices or mismanaged film properties – I’m talking about a basic philosophical tenet – expressed in the swamps of Dagoba and repeated on a near daily basis in conference rooms and Facebook feeds across the country. “Do or do not. There is no try.”

Yoda was trying to get Luke Skywalker to see beyond his own perceived limitations – to believe that he could do more than he thought was possible… Yoda tried, and Yoda failed. What Yoda DIDN’T do was quit. He kept trying to get Luke to accept his potential, and to embrace the power of the force. Eventually, that trying paid off.

Well meaning friends, people I dearly love, pull this aphorism out all the time. THERE IS NO TRY! JUST DO. It’s meant as encouragement, the same as when Master Yoda said it, but it’s sabotage. If I only “DO” – that is, If the only actions I take are ones I know I will succeed at, I don’t grow. I don’t risk. If I do risk going beyond my known limits, I will fail. Not every time, but sometimes. In that sense, I’m not DOING the thing, I am TRYING to do the thing. I am risking. I am failing.

This is the basis of the scientific method. It’s the basis of entrepreneurship. It’s the basis of evolution. You will never know what is true (or what is possible) if you don’t try. Test your hypothesis! Launch your startup! Crawl out of your primordial ooze and take a step onto the land! Try! Fail! Try again! That is how you grow.
When someone tells me “Don’t TRY, Just DO” – the message I hear is “if you don’t succeed, it’s because of your own weakness.” You didn’t clap hard enough, and now TINKERBELL IS DEAD. There are plenty of spiritual practices that espouse that same hateful philosophy – that somehow your fate is tied directly to your faith. So everyone living in crushing poverty is there because of a lack of moral character, and anyone who doing exactly the thing they want to be doing has made that choice themselves.

My daughter is just getting ready for middle school. She’s a well adjusted kid, and she is great at a lot of things. She plays violin beautifully, she is a talented artist, and she LOVES science. Not too many years ago, she was exhibiting some real perfectionist tendencies. She would draw something, and if what was on the paper wasn’t just exactly what she pictured in her head, she’d scribble it out. If the person sitting next to her drew something she thought was better, she’d hide her drawing away and refuse to continue. She wanted to DO. She wanted her art to spring from her pencil fully realized. It showed in her music, where she would be a wreck if she had to learn a difficult piece, because she knew what the notes SHOULD sound like, and she knew she wasn’t hitting it. She didn’t want to TRY, she wanted to DO.

It sounds strange to say it, but I hope if my daughter learns one thing from me, it’s to TRY. Try and fail. Fail a LOT. Learn from it, of course. Fail better the next time – but nevernevernever stop trying. I want to be the role model for Try. I will continue to jump in to see how deep it is, bite it off to see if I can chew it, and sometimes… sometimes I will try to lift stuff with my mind. I haven’t succeeded yet, but wouldn’t it be cool if I did? Until then – trying doesn’t diminish me, it enhances me.

I had a conversation yesterday with a business friend. We were discussing careers – choices we were making, and choices we had made. He told me that he had launched and lost FIVE businesses before his current company. Lost every penny he had ever made each time. He tried and he failed and he tried again. He tried every possible way, until he found the right way. He has the career he wants today, not because of mystical powers or (gag) microscopic symbiants – but because he tried. It’s a good strategy – Just Try It.

A short lesson about bullying, and the power of cookies.

Is Hourly Comic Day still a thing? Anyone doing that? hourlycomic.com/content/hourly… 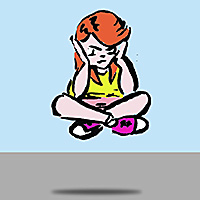 ON SALE NOW! at IndyPlanet