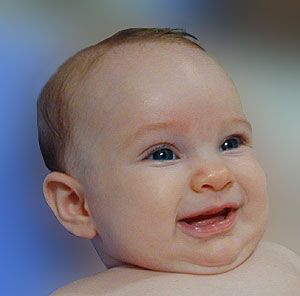 At her age, Zoe is learning new things on a daily basis. She can reach for things, hold herself up with her hands, and she seems just days away from being able to roll over at will. These are all very important things, and as a dad, I’m properly excited about all of them. Still, there is one new skill that my daughter has learned that means more to me than all of the others.

My Daughter can laugh.

What’s the big deal, you say? Surely she’s been laughing almost since the beginning, right? Well, yes, and no.

It was a huge day for me, the first time my little girl smiled and I could honestly say that it wasn’t gas. It was an even bigger day when she looked at me – looked at me – and smiled. She’s been making happy noises since very early on, but this is different.

Last week, Stacey and I were being silly. I was telling Zoe something, making a joke, and it struck Stacey and I very funny… and we started to laugh… and so did Zoe. Not a grin and a noise, but a full on, bubbling up from the soul, laugh. I made a joke, and my daughter laughed!

This is very important, because historically, the only person that laughs at most of my jokes is my wife. I’ve travelled a lot, and I’ve met lots of people… and I’m pretty sure I’m not going to find anyone else who really appreciates my particular sense of humor… but I can make them.

DO YOU REALIZE THE POWER HERE?

Theoretically, if I had enough kids, I could get a standing ovation at Carnegie Hall.

I could write a successful comic novel!

I could get a sitcom on Fox!

Okay, so technically, anyone can get a sitcom on Fox. Still, the point is that there is someone out there that is going to think I am funny. I don’t really care if my kids think I’m infallable or smart or strong or any of those standard status things that most dads enjoy – just give me a few years where she thinks I’m funnier than Jim Carrey.

I spoke with my wife on the phone today – she and Zoe are in Connecticut this week. Apparently, Zoe has learned a new skill while they have been away. She’s learned to blow raspberries.

That’s right, folks, a week after laughing at my joke, my daughter has learned to heckle.

They grow up so fast.