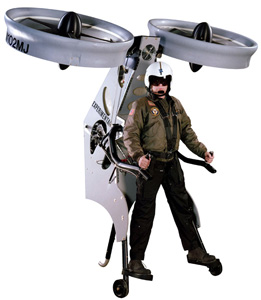 It is no secret that I have been waiting a lifetime for my jet pack. Television promised it to me and I expect science to deliver. Then, when one does become available, they screw it up with some lame caveat that you can’t use it. That SUCKS!

I’ll say it again: “I am a target market!” You make me a reasonably affordable jet pack, and I will buy it. I will specify that I need to be allowed to fly it. I am Icarus Grounded. Think about it – if Daedalus had only used a more heat-resistant medium when fashioning his legendary wings, the story of Icarus would not be a cautionary tale about disobedience youthful exuberance, but rather a celebration of man’s exhultation and passion. It’s a story of grabbing life with both hands, sidetracked by design flaws and cheap manufacturing. Are you listening, Detroit? Hello, Flint Michigan? Do you want that “American Made” pride to return? The future is not in hybrid-electric cars, it’s in JET PACKS!

My co-worker contends that Jet Packs will be the downfall of modern society, and she may be right. I don’t trust most folks to park near me, so the idea of them flying is pretty scary – but I figure if society is going down, I want a front row seat. Those people aren’t going to be early adopters, so by grabbing one of the first models, I’ll log plenty of airtime before the average yokels get off the ground. By the time the government starts regulating the fun out of them, I’ll have moved to my secret lair on the ocean floor, where I will remain with my beautiful and intelligent family until the rest of the world has destroyed itself. Then we shall rise up to repopulate the earth and rule with wisdom and …

Perhaps I have said too much. Move along, there is nothing to see here.