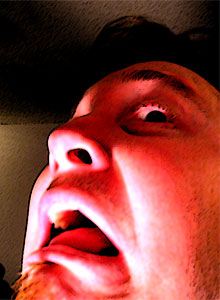 Maybe it’s because I’ve spent a long time wanting this. We were very fortunate (read fertile) in that we were immediately successful when we began trying for a child, but we’d been discussing it for quite a while, and frankly I’d been dreaming of it for much longer than that.

There has been much written about dads-to-be – and it is not good. At best, we suffer the interruption in our sexual patterns in moody silence. According to many pregnancy experts, we are expected to spend our time complaining about how fat, gassy, and unsexy our wives have become. We’re apparently doomed to be awkward and uncomfortable with our babies, ducking responsibilities (and diapers) at every turn.

Okay, I get it. There are certainly men out there – men who got married because it was convenient, or the thing to do. Men who didn’t want to have anything to do with the planning of their wedding, and who feel that the bachelor party is some sort of magical “free day” – where hookers are a perfectly acceptable way to bid farewell to their freedom when they should be spending their time looking to order a ring online. I get that those men might not be particularly enthusiastic about welcoming a new child into the house. After all, that would represent direct competition. As unfair as it seems, their maids wives might choose to attend to the needs of an infant before them.

Ultimately, I’m not even worried about being painted with that brush. One of the best things about telling our family and friends about the pregnancy was hearing people tell us what great parents we would be – and knowing that they meant it. We are going to be good parents. We love kids. We dote on them. Sure, we’ll make mistakes, but that’s a part of it. I think knowing that, and knowing that kids can survive the imperfections of their parents, works in our favor. We don’t earn tons of money, but we certainly earn more than our parents did when we were born – and I’m confident that if something happened to our current income sources, we’d remain employable.

Of all the possible things I could be afraid of, I think my biggest fear is that there isn’t going to be enough time in the day. I fear that I will begrudge every non-baby minute. As for the rest of it? Bring it on. Daddy’s waiting.