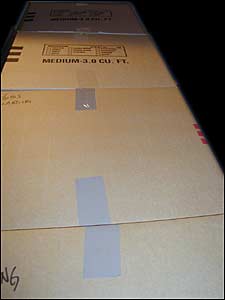 When I was growing up, we had a portion of the basement where we put all of the boxes of stuff we didn’t need right now, but would theoretically need sometime in the future. We also had a portion of the garage where we put the stuff we didn’t need right now that wouldn’t fit in boxes. Every year or so, I’d be recruited to sift through, throw out, and send to Goodwill.

I’m not a kid anymore.

Nowadays, I live in a much smaller place. This smaller place has a couple of cabinets in the garage, but is otherwise entirely unsuited to storage of large quantities of stuff that we might want sometime in the future. The place we lived in before this was even less suited to the storage task. As a result, we have a storage unit. It is not in the basement, and it is not in the garage. In fact, it’s a good 20 minute drive away. Consequently, many of the things stored there (because we didn’t need them right then but might theoretically need them sometime in the future) have in fact been stored there for 10 years. Because our storage unit is not large, and because our car is similarly not large, we don’t do a lot of sorting through, throwing out, and sending to goodwill. Oh sure, every once in a while we’ll dig through to see if we can find some fashion remnant from the late 80s, or we’ll pull out one of those boxes of photographs or something, but the vast majority of the stuff is just sitting there. Because we might need it. Sometime in the future.

So, one of the things in the storage unit that I actually did think I needed was my bicycle. I bought it several years ago, but because our old apartment had no place to put it when I wasn’t riding it, and because I really wasn’t riding it all that much – I put it in storage. Now suddenly I have a desire to ride it, and I even have garage space where it could be safely parked. Well, locked to a pillar, anyway. So about 2 months ago, I decided to go pick it up.

When I put my bicycle in storage, our primary vehicle was a Geo Hatchback. The Geo is a tiny car, but being a hatchback it actually has a surprising amount of hauling capacity. Not so with our current car, a Nissan Maxima. The Nissan is a wonderful car, but the trunk is not huge, and while the seats do lean forward, the passthrough from the trunk into the back seat is more of a porthole. It is not a car for hauling. Owing to the limiting design of the vehicle, and also my lack of forsight to bring tools for dissassembling the bicycle, my first attempt at retrieving the bike failed.

Fast forward two months of wanting to ride the bicycle, but not being able to get to the storage unit during hours of operation… I opened up my unit, only to discover a complete lack of pedal-powered fun! My first thought was – “Oh! My wife is trying to surprise me by having the bike tuned up without me knowing!” That thought was quickly followed by several other thoughts, including “How would she get the bike into the car?” “How would she get into the storage unit without the key, which she does not have?” and “Why does it look like the storage unit has been through a minor earthquake?”

So, apparently, my bike has been stolen.

My fault, I’m sure. The last time I tried to take the bike home, I was hot, tired, and frustrated. I remember getting the bike back into the storage unit, but I am guessing I failed to get the padlock closed properly. I am guessing this, because there appears to be no sign of forced entry. In fact, the padlock was neatly secured when I arrived. I spoke with the manager – who lives on premises – to see if there had been any other reports of burglary. He said he had never had any reports of burglary, and that there had been no break-ins (to his knowledge) in the 30-odd years that the storage facility had been in business. Further, he told me that he goes around every couple of days to make sure everyone has locked their doors properly, and that he’d have remembered if he had found mine open. Clearly, this was a crime of opportunity. Someone – probably someone with a storage unit right next to mine – noticed the unlocked door and couldn’t resist a peek. Having peeked, they couldn’t resist a bicycle. From what I can tell, they managed to resist everything else in the unit.

That’s the other thing. I’m sad that I lost the bike – it wasn’t an expensive one, but I certainly hadn’t gotten my money’s worth out of it yet – I’m sad about that, but I can’t really think of anything else in the unit that I’ve got any attachment to. There are clothes that will no doubt end up in Goodwill, books that may or may not find their way back onto my bookshelves (when and if I ever have the shelf space to accomodate them), and a bunch of stuff that I might have a use for if I ever had the space for it. Mostly, though, it’s just stuff I never got around to getting rid of. I dislike thinking of myself as a pack-rat, and I like thinking of myself as a pack rat who is paying nearly $100/month for the privilege even less. On the other hand, what if I there is something else in that mound of personal detritus that I want later as much as I wanted the bike now? I’m all for being zen and minimalist, but even zen buddists need the occasional bits of personal nostalgia, don’t they? Don’t they??

Oh yeah, that guy? The one who manages the place and lives onsite? He drives a Jaguar. He lives in a storage yard, and he DRIVES A JAG! What is that all about?