Who would have thought that being bad could feel so good? 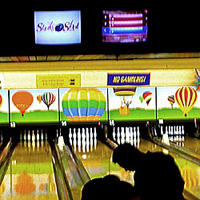 I don’t mean being being bad in the living fast, dying young, flaunt your disrespect of authority sort of way – I mean being really really unskilled at something. Of course, I’m talking about bowling.

I think the last time I bowled was probably a good 20 years ago. The beauty of having sucked 20 years ago is that you don’t have an appreciable loss of skill as a result of being away. I bowled a 113 and a 121 – very likely my best games ever, and about on par with blind arthritic monkeys in terms of skill level. Of course, many of the people in the lanes around us (and in fact many of the people in our lane) were also bowling at the blind arthritic monkey level, so it was all good. Our bar for success was no more than one bounce per throw. We were marginally successful.

Tonight’s foray into the Hollywood bowling scene with my regular Thursday night gang was a serious suckfest. Not for all of us of course – Tenacious A was pretty good, and Bicycle Jeff had the bowling equivalent of a lightning break going… but even they had their “not exactly league play” moments… and it was great.

LL Cool L was and I were talking about Bowling as the Great American Passtime – and decided that the key to enjoying bowling was… not thinking about bowling. Not worrying about form or picking up the spare or who had the best (or worst) score. Just… hanging out, laughing, and enjoying a little cameraderie. And that’s exactly what we did. We laughed, we ate pizza (brought in from the local pizza hut, we didn’t risk the snak bar) and drank beer – we had fun. Cheap fun! I mean, two games, plus shoes was only $8 each. Cheap!

Now if we can just find a championship level mini-golf course, we’ll be all set for next week.