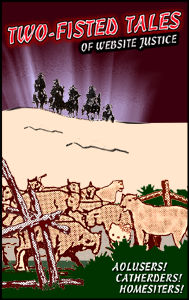 As dawn breaks over the digital frontier we find our heroes, Zeke Jeffers, “Ace” Kimball, Luke Anderson, and “Miss Adventure” Molly Malone, gazing with flinty eye over the vast, arid webscape. Devil-may-care hell-for-leather web designers with a taste for action, they are the spirit of the wild, wild web. They ventured out onto this untamed wilderness and bent it to their wills, creating one paradigm shattering site after another. The vast expanse of cyberspace was their domain, and they were its masters.

Today, however, was different. The once open plain glinted in the early morning sunlight with acre after silvery acre of fence, networking its way toward the horizon. “Cat herders” spat Molly; “they’re everywhere.” That was the truth – it hadn’t been that long since the unpleasantness back in Usenet when old Sid Tacktle and his gang rained terror on the first cat herders – harassing them, mocking them, even threatening their livestock – but still they came. The website land rush was on, and there was no turning back.

High Noon. Zeke and the others sat in the cool dark of the Dirty Dog Saloon, strapping on their gear. Rumor was that the boys from the K Bar K ranch were headed into town with mischief on their minds. It was to be a showdown and no two ways about it. The Bar K boys had been doing quite a bit with their tiny nonstandard interfaces and were anxious to show their chops. “Maybe they won’t come,” said Luke, eyeing the door. “Oh, they’ll come,” said Ace as he fingered his matching perl handlers, “with all them ‘Flash’ boys around, they need all the cred they can get.” In the corner, Molly just snorted. She hated this sort of thing, and wished she could be off somewhere tending to her content.

Light flooded in as the door to the Dog swung outward, but instead of the deserted street that they had come to expect when there was a design shootout in the air, it was teeming with people. There were cat herders, of course, but there were also families, children, and, to their horror, SHOPPERS. “When did Main Street get so wide?” thought Luke, looking out at all of the roadrunner nodes and broadband connections that seemed to have sprung up overnight. It wasn’t just the street, though. Where there once had been a rowdy little design town on the edge of the technological frontier, there was now a full scale city. Simple ranching had given way to homesteading, and now it seemed as if everyone and their dog had a website. “But… how?” sputtered Zeke, realizing there would be no battle of skills here, that in fact they would be hard pressed to even find anyone from the Bar K in all the chaos. The answer was right in front of them. Next to the ISP station, where once had stood Justin’s House of Ill Repute, sat a brand new building sporting the sign “Evan O’Houlihan’s Newfangled Prebuilt Housing Emporium and Land Deed Office.”

“Kill ’em,” said Ace. “Kill ’em all.” Ace never did have much of a sense of humor about the tenderfoot masses, he considered them interlopers with no right to the space he had worked so hard to tame. Of course they couldn’t. Kill them, that is. They could shoot up the Land Deed office or try to chase off the homesteaders, but they knew in the end that it was too late. Times had changed, and what was once wild and anarchic was now teeming with regular boring people. Oh sure they seemed to be having a good time, chatting amongst themselves, going to their little socials, even creating their own mundane little sites and trying to impress each other with their “mad skilz,” but in truth they were pale shadows of those who had come before them. Zeke turned and went back into The Dog, followed by the others. He didn’t need to check his email to get the message. Their time here was over.

“There’s a lot of good work in community building these days,” he mused. “Maybe I’ll start some forums, try to pass on a little of what made us special to the next generation.” Luke coughed. “Been there, done that. I’m off in search of something new. There has to be some unspoiled country left somewhere.” Molly and Ace nodded in agreement; there was always The Next Big Thing. As it had with the gopher prospectors before them, the electronic world had moved on without them. History would certainly treat them well, legends who stood ten feet tall and lit up the night with their bold exploits and dynamic flair, but regular folks like having a little space between themselves and their idols, since having one in the neighborhood only serves to illustrate how mundane the rest of their world is, and how limited their skills. Nobody cheered as the heroes left, but nobody tried to stop them, either.

And so dear reader, as our heroes ride off into the sunset to search for The Next Big Thing, the iBurbanites drift into peaceful slumber. Soon, however, the silence is broken by a siren’s wail, then another, and another. Somewhere in the city, a new generation of iBurban kids, born never knowing of a world without the net, are hacking away at the blocky, restrictive ideas that surround them and mutating them into something new and dangerous. The old frontier might have been buried, but its spirit wasn’t gone, not by a long shot. Somewhere in the night, a coyote howled.